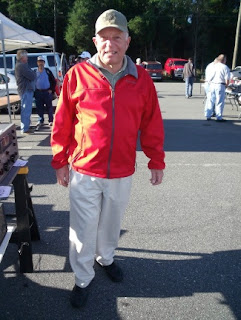 I'd like to talk about today's eBay interaction with Jon Weiner, K1VVC.  I can't really call it a transaction, as no funds or goods changed hands.  But they should have.

I've been looking for a Drake 2-NT off and on for a long while, more off than on...usually whenever I go to a hamfest.  But lately, I've started looking on eBay, and about three weeks ago, I saw a fair-looking 2-NT on eBay being offered by "radiotyke"...I had some questions about the rig, so I dropped him a note via the eBay messaging system, but never did get an answer.  I wasn't sure if I was being ignored, or if somehow my inquiry got missed.  In any event, I never did bid on the item without an answer to my questions and the radio sold for $156.03.

Now, I thought that was a little high for a 2-NT in that shape.  I remember them selling for $100-ish for a long time.  But inflation, scarcity, etc. seems to have driven the price up, and I've seen them selling on eBay the past few months for $102.50 up through $355...that doesn't count the one that went for 87 bucks - it was missing its covers.  I seem to recall seeing one for around $500 earlier in the year - which flabbergasted me!  To me, a fair price for a 2-NT in good shape these days would be in the $150-200 neighborhood.

This morning I got a notice from eBay for a new 2-NT listing.  Checking it out, I noticed it was the same seller as the one I saw three weeks ago.  I remembered not getting an answer on those inquiries, but I figured I'd try again.  I saw radiotyke had over 10k ratings contributing to a 99.5% feedback, so I figured he was pretty busy.  By the way, I worked for an eBay retailer for a couple years, and 99.5% is not considered a particularly good rating...but I've never had any problems dealing with anyone on eBay and have purchased from sellers with lower ratings, so I wasn't put off by that alone. I know that sometimes buyers leave negative feedback when they probably shouldn't, and sellers that are active tend to pick up the occasional negative feedback.

So, I decided I'd give radiotyke another try.  I cut and pasted the same questions I asked three weeks ago, and was answered pretty quickly.  Here's the total of our exchange via the eBay messaging system, with an occasional comment added by me:

05:22 [AA4GA] Is this transmitter operational? Has it been re-capped? Would you be interested in a Buy it Now transaction - I could pick up and you wouldn't have to bother with packing the rig (I live in GA)?

<I live less than two hours from K1VVC, and really would rather not subject the old radio to shipping, and wouldn't mind a little drive>

05:35 [K1VVC] Yes, the transmitter is working. I beleve it's completely unmodified. It's listed as for auction. If I added a "buy it now" price what would you offer?

<right in the middle of my "fair price" range - the rig is pretty good cosmetically, not great, and will probably need new caps and maybe new tubes>

06:03 [K1VVC] Unfortunately eBay does not allow me to add a "buy it now" price after an item has a bid on it. If you're serious I can cancel the auction and relist it with a BIN of $175.

<at this point, we have a "meeting of the minds" and the deal has been made>

06:30 [K1VVC] Ok - I've relisted the radio with the BIN price as you requested. I don't think 6-7 today would work for me. I'll be home all day tomorrow (until about 6PM). Thursday before 2PM would also be OK.


<Further confirming that we have a deal>

06:46 [K1VVC] eBay has changed some of it's rules lately. To make an offer it has to be a fixed price listing only, not one with a BIN price. It should be OK now

07:28 [AA4GA (via email)] I should be able to get you PayPal as soon as you accept the offer...
I work until 4:30 or 5, and am about 1:45 from your place, so we'd need to get together in the evening.  If we need to get together earlier in the day because of your schedule, it would have to be on the weekend unfortunately.  But I really would rather pick up than ship...I don't really like to ship old, fragile items if I can help it!
It looks like I won't be able to make the Shelby hamfest this year, so the 2-NT is my consolation prize!

<As fast as we'd been communicating, I was a little worried at the lapse in time without hearing from him>

That just blew my mind!  Gentlemen don't reach an agreement and then back out.  I wondered if it was an attempt to extort a higher price from me, but no mention was made of me meeting or beating that offer, nor was I going to make one.  At that point, trust had been violated and no way I would I have purchased the radio.  But I was still on the hook as far as eBay was concerned, but finally at 09:21, I got official notification from eBay that my offer had been declined.

So, my recommendation for dealings with K1VVC is to be very careful.  In my case, I'll just stay very far away...you decide who you want to trade with.  Oh, in addition to "radiotyke", he seems to also use the eBay seller account of "jonweiner-k1vvc"...and he seems to be active some on qrz.com, eham.net and qth.com.