I've been a ham for over 35 years.  One thing I've learned over that time is that there are two basic types of hams:  operators and tinkerers.  Sure, there is a lot of overlap, but most folks can be categorized as one or the other.  I've always been an operator.  While I've never built a transmitter or a receiver, I have done a fair amount of tinkering, building keyers and audio filters and other accessories:  usually from kits, but occasionally from scratch.  Even some simple switching stuff of my own design.  But never a radio.

And on the surface, that's kinda odd, as in the "old days", say the 1960s and back, almost all hams built their own gear to some extent.  Certainly more than is done today.  But I've always had a little niggle that made me want to build a radio.  I've been drawn to QRP over the years and read a lot of the QRP articles in CQ and QST, but I never did anything about it.  Then a year ago, when I started getting back on the air, I knew that niggle would come back and that I would want to build something.  So, I started building up a collection of parts and reading articles and QRP books and thinking about what to build.  Between that and the information that has become available on the internet over the past 20 years, there is a huge body of potential QRP projects out there.

I knew I wanted to start with something simple, and that I didn't want to just stuff a board with parts, so I wasn't really interested in just buying a kit - although there are some really nice ones out there these days. I recently picked up More QRP Power, an ARRL publication which is really just a collection of reprints of articles from QST.  Included was the March 2000 cover article "Tuna TIn 2 Today", which was an updated version of Doug DeMaw's classic from 1976...the same year I was first licensed.  It's simple, classic, and had no unobtainable parts - in fact, I already had everything I needed on hand. 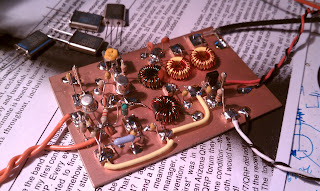 So, this past Friday night I started on my own Tuna Tin 2.  While there have been a number of TT2 kits over the years, and at least some version of it is still available, I wanted to "roll my own".  I decided to build mine using Manhattan construction.  I also wasn't that interested in building one up in a tuna can, so I plan on eventually housing mine in the now-classic QRP enclosure, the Altoids tin.

I had recently built the K8IQY Magic Box T/R switch from the Four States QRP Group, so I didn't need the TT2 T/R switch.  Also, due to some issues I'd heard mentioned on the Magic Box Yahoo group, I decided to add a keying circuit so the Magic Box wouldn't be switching the 12v.  I don't know if it was really needed or not, but what the hey!  The mod I used was from N4UY on this page.  I also used the recommend bandpass filter from Ed Hare's 2000 article to clean up the output.  Oh, and I replaced the 56 ohm resistor in the PA emitter lead with a 33 ohm resistor in series with a 100 ohm trimmer, allowing me to vary the output power easily.

Friday night I got all the parts together and started soldering and completed the oscillator.  I didn't bother testing it, but continued Saturday afternoon and just resumed where I left off, builing the PA and winding the toroids.  After a couple hours I connected power, a crystal, a dummy load and a wattmeter and shorted the two keying leads together, and couldn't believe it - just below 7040, there was a clean signal at about 250mW output!  I adjusted the Q2 pot to give me exactly 200mW and shut everything down - no troubleshooting needed!

Later that night, I pulled ou the Magic Box, my Drake R4, the TT2 and a straight key and hooked it all up.  The MO QSO party was in full swing, but I couldn't get anyone's attention:  I don't know if I was too far off the CQers' calling frequencies, or if I was just too weak, but no one heard me.  Dang. 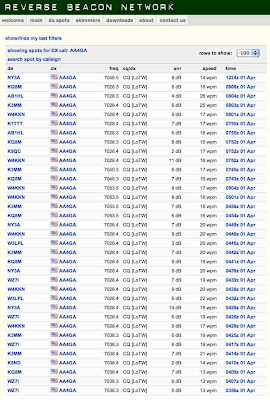 I decided to call CQ, and was happy to see the reverse beacon network had several skimmers that picked me up.  Whew, it really does work...but the SNR sure is low!  I spotted myself on QRPSPOTS.com but that didn't seem to help.  I dozed off and tried again about 3:45am with no luck.  When I got up at about 8am after putting on coffee, I decided to try one more time before the sun got up too high.  Right before I was about to pull the plug, W0EA saw my spot on QRPSPOTs and gave me a call.  He was about 559 with his 5 watts and gave me a 219 - almost an hour after sunrise on 40 over a distance of 708 miles (over 3500 miles/watt!), I'll take it!

I don't know that I'll get WAS with this rig or not, but I hope to give it a shot over next winter.  By then, I'll have the board in a box and everything all neated up...for now, the TX is just a board with some wires hanging off it...not very pretty - but it works!

I'm not sure what's next, but I've got a couple projects in mind...maybe an updated Sardine Sender from the same era...
Newer Post Older Post Home
All Time QRP Totals
Since February 2011