KD1JV designs some pretty cool radios.  He's been producing a series of transceivers in kit form called "Appalachian Trail Sprint" for several years now.  Characteristically, they're small, lightweight, radios designed for use while on backpacking trips.  They use DDS VFOs and have a lot of functionality built in to a microcontroller that runs the whole show.  Steve generally kits up about 100 kits at a time, and they are normally sold out within a day or two of the offering.  He is constantly changing the rigs around and making improvements, so any particular rig has a fairly short run.

The rig that had the most appeal for me was the ATS-3b.  I liked it because it was multi-band (6 bands possible through changing out filter boards) and fit in an Altoids tin.  While I'm not much of a hiker, this rig seemed ideal for the Adventure Radio Society Spartan Sprints, a contest that includes huge scoring advantages for lightweight rigs.  Unfortunately, the ATS-3b was introduced in September of 2007 and after a couple batches, all had been sold...and I didn't become active in QRP or even know of this kit until February of 2011.  So it would appear that I would miss out - and I wasn't very interested in Steve's latest ATS-4 rig because it was bigger, and heavier, and used a somewhat funky bandswitching arrangement - effective, but not what I was looking for.

Then, one day last summer, Jim, AL7FS, started selling off a number of surplus QRP kits, including an ATS-3b.  The response was pretty strong, and Jim decided to enter everyone who was interested in purchasing the rig into a lottery, and my name was the one pulled out of the hat!

So, I've got a fairly complex, small, SMT kit to build, and I've never built anything using SMT nor have I built anything at RF!  So, I decided I'd work my way up to the ATS-3b by building several other little projects beforehand.  And I decided I wanted to hand-solder and not use any of the hot-air SMT methods.  I built an SMT dummy load kit, a Softrock SDR receiver, a crystal checker from scratch, a frequency counter, and a couple other small projects.  None of these presented any problems.  So, I figured it was time to start the ATS-3b!

Last Friday I did a parts inventory for everything but the band boards - the manual didn't include a parts list for these, and I figured anything missing wasn't critical and could probably be subbed from my parts stash.  The inventory was OK, with the exception of having two extra resistors of one value and being short one 22k surface mount resistor.  After reviewing the parts placement diagrams, it looked like the parts list was wrong and the count was fine, so I launched into soldering resistors.  The first thing I realized was that the 805-sized resistors were a good bit smaller than the 1206s I'd used before!  Not to mention that the parts were packed in a lot tighter on the ATS PCB!  Then, I got started on the 603-sized resistors...they were almost too small to be fun!

Saturday morning I got started back up and completed the resistors and inductors and went on to the capacitors.  Luckily, the worst was over with the passive devices - those dang 603 resistors.  The caps went a lot faster because they were bigger, as well as color-coded.  I was being careful to have all the resistors oriented the same direction, and that along with having to actually read values made the resistors slower-going.  So, after taking in dinner and a movie with Mrs. AA4GA Saturday night I got started on some of the chips.

Sunday I continued with the ICs and on the DDS, almost drag-soldered it in place, using Solder Wick to clean up the pins later - seemed to work just fine.  We had a picnic to attend Sunday afternoon, so I didn't quite finish the rig on Sunday - I had completed the chips and was working with the through-hole parts and got through most of them before turning in.  I have one of the "Sindy" Altoids tins and didn't want to mount the rig as designed, and discovered that Chuck, WA6LTV had done exactly what I had in mind - put the pushbuttons on the back side of the board, and open the tin when needing to access the buttons...so, that's how I'm mounting mine.

Monday evening I finished the through-hole parts and before testing, built up the 40m band board.  I had a bit of a slowdown because the color codes on my trimmer capacitors didn't match the details in the manual I had printed.  After some checking on the AT_Sprint Yahoo Group, I decided my printed manual was a later version, so I pulled out the CD that came with the kit and popped it into the computer.  Sure enough, the color codes in that version of the manual matched my parts, so back on track.  The worst part of the band board was the 45-turn transformer on a .37 inch toroid - not a lot of fun with my fat fingers...and I've got another of those for the 30m board, and one with 60 turns for the 80!

Anyway, I got the 40m board done and started the checkout routine - I put in a pair of earbuds and connected the power and immediately heard a morse "8" - ah, it works!  I went through all the tests up to adding L3 into the circuit when I went to bed.

Tuesday evening after work I wound L3 and completed testing - I actually got to use my 'scope for the first time as a real tool!  Everything checked out fine and I calibrated the DDS and peaked the RX bandpass...on to the 40m filter board.  This is the only place I ran into any problem.  I'm only getting out about 1.9 watts using a fresh 9v battery.  I played with the windings on the board, but not much improvement.  I'll have to do some more checking on this, and see how the other bands work out, so I'll go with ~2w for now.

Connecting the rig to an antenna was pretty neat - it actually hears pretty doggone well!  I put the dummy load back on and played around with some of the commands and controls and after a few minutes decided to call CQ to see if I could snag someone.

I tuned up to about 7033.3 and CQed about 4 or 5 times when Bob, W9JQT called in at about 569, giving me a 579.  Bob's call was familiar, and during the QSO I remembered why:  Bob is the creator of the Rockless - a Rockmite derivative he designed that uses a VFO.  Amazingly enough, Bob was running a Rockless!  A neat rig that is on my list of possible construction projects.

I did commit a faux pas while working Bob...I thought I was using the RIT on the ATS-3b to tune Bob in a little better, but didn't have the RIT switched on - so we kinda chased each other around the band a bit - ouch!

The mounting of the rig in the Altoids box actually was pretty uneventful - instead of trying to drill the holes, I used a Dremel tool and various grinding bits to open the holes up after drilling small pilot holes.  It worked pretty well.  So far, I haven't opened up the hole for the digital display...I've found I don't really need it as the rig is designed for full annunciation through the headphones using Morse. 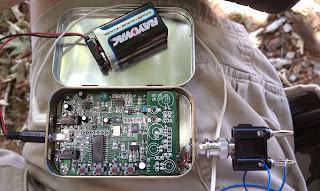 So far, I'm very happy with the new rig - I've just got 5 3 more band modules to build and then squeeze it all in an Altoids tin!  Here's the rig on it's first field trip - I had a gig to play at an outdoor arts festival, and on the way out the door, decided to grab the ATS-3b and a bit of wire to just listen on while I was waiting for our band's slot.  The rig is just balanced on my leg with a 9v battery.  Pay no attention to the fine antenna connection!  It really is no problem to operate the rig by lifting the lid.   This is fun stuff!
Newer Post Older Post Home
All Time QRP Totals
Since February 2011