First Parks on the Air Activation 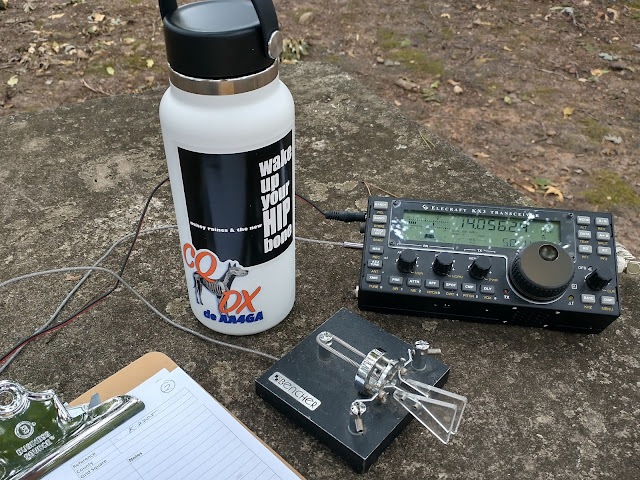 I know I'm working on getting up big antennas and more power, but that doesn't mean I don't want to go out portable.
Years ago I was active a bit in Summits on the Air (SOTA) and was even the Georgia regional manager for SOTA for a short while.  I stopped having as much time for SOTA as I'd like, and there really aren't many SOTA peaks near me, so my SOTA participation dropped to zero.  About the same time, Parks on the Air (POTA) got going.  I never did anything with it, only occasionally giving out a random QSO every once in a while to an activator.
Within the past couple weeks, I've actually started looking at POTA a little more closely, and started actually going after some activators that were spotted at POTA.app.  Then a few nights ago I saw my little-used KX3 over in the corner and decided I'd do my first POTA activation this weekend.
I kinda went off half-cocked, just tossing a bunch of stuff in a bag Saturday morning and heading off to the nearest park, about a half-hour away.  When I got there and started putting stuff together, I realized I wasn't as well-prepared as I'd like to be!  My throw bag was missing, as was a spool of mini paracord I use for hanging antennas.  So, my antenna installation wasn't as robust as I'd like.
I started with a random-wire, hung vertically with a counterpoise.  This had always worked great on SOTA peaks, but those were better locations on tops of mountains.  A low random wire in the flatlands wasn't nearly as good an antenna.  Plus, I couldn't find my binding post / BNC adapter and used a 4:1 balun.  Let's say the tuner in the KX3 struggled.  I struggled too.
After a half- hour, I only had 5 cw contacts in the log and decided I needed to find some SSB chasers - both for park-to-park (P2P) credit, and just to get the 10 contacts I needed for a valid activation.  I found 5 SSB contacts in 15 minutes, and went back to CW for a few more before calling it a day from my first park:  Watson Mill Bridge State Park, K-2207.
So I packed it all up and drove to my second park of the day, Victoria Bryant State Park, K-2205, about a 20 or 30 minute drive.  Here I decided to use a Par End Fedz antenna.  I got it hung a bit better, and after about 40 minutes, I had 18 CW contacts in the log.  It was starting to spit rain, so I bagged it and headed home.
I had plans for another two parks, but my general lack of preparation and the weather looking like it was turning south, I headed back to the house.  I'm re-grouping, and next time will be much better prepared, with a better, more well thought out game plan.
POTA is a lot more accessible than SOTA for most people.  There are simply more POTA sites available to the average ham.  POTA activations can happen from the vehicle, while SOTA requires a certain amount of human propulsion.  Because of that, multiple activations are easier to do in a single day.  And, there is simply a lot more activity on POTA than SOTA.  POTA is also easier in inclement WX.
Maybe next spring I can combine a POTA and SOTA activity.  Keep checking the spots.
Newer Post Older Post Home
All Time QRP Totals
Since February 2011