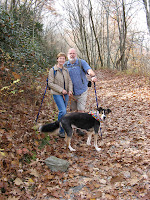 Anna (a/k/a Mrs. AA4GA) suggested that it might be nice for the two of us to take a day off work and head to the mountains to do a little leaf watching in the form of a hike and SOTA activation.  Sounded good to me, so we both arranged to be off work and headed for North Carolina.

Whiteside Mountain is about two hours north of us, but we stretched that out a bit, taking a more circuitous route on some slightly less-travelled roads.  It was a good choice, as we were able to see a bit of color on Highway 28 through South Carolina and Georgia, although the leaves were definitely past their peak - we shoulda been there last weekend!

No matter, as it was a super day for a walk in the woods.  This was our third trip up Whiteside this year, and my second SOTA attempt there.  Our first two trips were in July, and both were cut short by thunderstorms.  As we arrived today, there were some clouds, and it was obvious it had rained not long before we got there, but it looked like there was no storm threat, so we headed up the hill.

The trail at Whiteside is about 2 miles, and makes a loop, with the counterclockwise direction being shorter to the summit, but steeper.  The clockwise direction follows an old logging road, and with my knees, is the route I prefer, both ascending and descending, so that's the route we took.  After a mile or so, we came to the first overlook - it's quite a spectacular sight after hiking through the woods.  After that, there are several overlooks before coming to the summit, each amazingly more spectacular than the last.  The trail is in great shape, and gains about 800 feet in the mile or so to the summit. 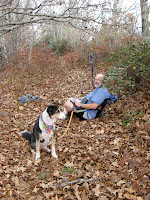 Near the top, we found a nice spot just off the trail - it looked like a remnant of the old road used for sightseers in the early 1900s.  Nice and flat, with a little room to stretch out my 30' of wire and a counterpoise.  Like the previous Wildcat Mountain activation though, I did have a kink or two in my antenna.  Again, it didn't seem to matter too much, as I was able to make 19 QSOs on 20 and 40 meters, including England and the Slovak Republic, all on CW at 5 watts from the FT817ND.

The battery on the FT817 is starting to show its age - I only operated for about 40 minutes, and at the end of that time, the voltage was dropping to around 9 volts on transmit.  I had charged the battery only a couple days before the trip, so it should have been in decent shape.  I decided to leave the gel cell in the car this time, but may have to lug it around in the near future until I can get some kind of lithium pack setup for this rig.  I really need to start using the ATS3B for SOTA, but I need to work out an antenna solution that won't present high SWR to the rig while tuning, as that rig's final transistors are a little fragile.  I've got some ideas, so stay tuned here to see how that pans out.

KU6J's new RBNGate system worked FB - and a good thing, as I left my smart phone in the car at the trailhead and couldn't have self-spotted if I needed to!  I also forgot to write down my summit designator before I left and totally spaced out on what it was when I was asked by KE5AKL, who himself was on summit W5A/PT-003 - thanks for the S2S QSO!  The hardest part of the activation was trying to keep the official mascot of aa4ga-dot-com from getting tangled up in the counterpoise!

Another good day playing radio from on top of a mountain!
Newer Post Older Post Home
All Time QRP Totals
Since February 2011